They did it again,,They will do it again…. No rest no break.. We know what we are talking about, we always knew!..

This past week, the Expat community in Cagayan de Oro was again the subject of controversial,  and yes, shameful conduct amongst a few.
We, authors of the sexpat wall of shame blog are particularly interested by one of them, the one involved in a shooting that cost the life of three, and may be four, innocent young guys. The story was first published in the INQUIRER,  then in the Sunstar/cagayan-de-oro before making it in  to several blogs and discussion forums owned and managed by foreigners.

The intriguing part of this story is the involvement of an American living in CDO, an active member of the Expat community named Michael Turner.
At first, the members of this community, together with other foreigners posting in various forums talked about “another foreigner bashing” other downplayed the matter as a “pure coincidence, the foreigner just happened to be there”.

But the police in CDO didn’t buy the explanation and start digging to find out the role of Mike Turner in this strange shooting killing 3 people. I am sure they know more than what they revealed so far., I am sure they will tell us once the murderer (a policeman) is arrested and confesses.
But the police is not the only one not to buy Michael Turner explanation why he was there that night and talk to the killer. We don’t either. We don’t believe a damn word of what the sexpat community in CDO is saying on this matter in an attempt to cover up one of theirs, neither will let go the jubilation of Pimp Mike Mounstephen owner of Spooks brothel that all he cares is that this murder didn’t happen to his bar but in that of a competitor’s. ( More on what Mike Spooks said  on the next update)

Convinced that within the ranks of Mike Farrell’s expat community reside guys of questionable background and morals, we have discovered the following on Michael Turner that the Police should consider in their investigation furthering the findings with all means they have available, like exchange of information treaties with the US Judicial system. The information that follows may be partial since they come under the US  Freedom of Information Act and from one county only. As a private citizen it is harder to obtain a nation wide criminal record on some one, but PI authorities can. Here is M. Turner’s record. 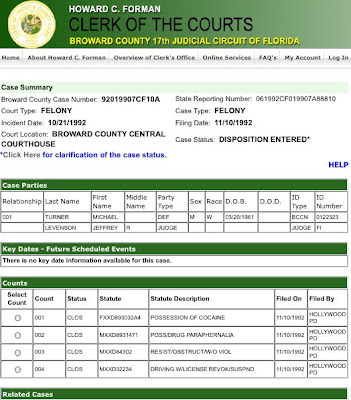 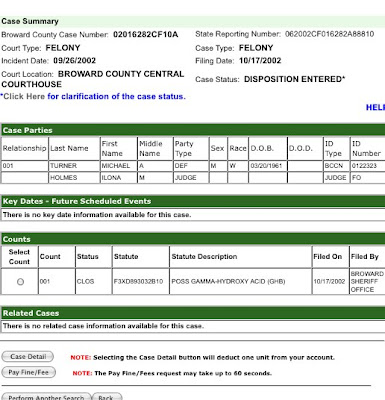 I have also uploaded a file containing an affidavit of an ex Michael Turner business partner.

I couldn't close this chapter without a message to Mayor Jaraula, an unconditional supporter of those indecent expats. The guy he's proudly pictured with is writing his blog under the name of Jungle Jill. He quickly came in defense to his mate M. Turner to state the following:


"Another charge floating around is from 18 years ago, relating to cocaine possession, resisting arrest, and driving without a license, which is almost certainly the Mike Turner we know and love. Regardless, to me that sounds more like a night of intense partying that didn't end well, rather than any heavy-duty criminal activity.

Heh. I had a couple of nights back in my 20's that ended with flashing lights and the crackle of a walkie-talkie... Some of the most amusing and memorable nights in my life, in fact. (Ah... Montreal, 1993... what a weekend. It started in a girlie bar with Tom Cruise, and ended with a cell mate named Rocco. It was all equally entertaining.)

Hmm. Now that I think about it, having little things like that in one's past is a sign of character... like scars, or a tattoo that says "I Love Yolanda" yet you can't remember who she is. They are the signs of having experienced the full panoply of life's vicissitudes in all their awful and awesome glory. The fact is, the best of times always live on in our memories... but it's the shitty times that are most likely to leave a mark".

Yeah right ... Tell that to Mayor lol! That's all you have for us? we are not sure is the whole story... It looks to me like birds of feather that flock together!

I am once again appealing to the CDO Police department to investigate the expat community on this matter disregarding Mayor Jaraula Support to M. Turner and others have received in the past. I am appealing to the BI demanding a thorough background check on all residents living in the area. I have a hard time to believe that this expat was there talking to the killer about a camera….

http://evaniliadis.blog.com/
Posted by Dean Marston at 12:27 AM

Complains, complains and complains!.. Mike Farrel is worried!...Paul Petrea unhappy with me...

I'm often receiving mails from Mike Farrell usually on Fridays after Spooks gathering marked at 3 AM PI time and of course, what else, in a drunkard's written style as Brad Hughes and others who know him have described. I do not usually reply, except  last Christmas day where he went nuts, crazy over a dispute with Brad, barking all day for a reply and mad why he didn't get one from me. So I got a drink to calm him down, he got my reply and that was it!..
I have since received quite a few mails written in the same hours and style but never replied... Something that angers him.

Today I decided to make an exception. I receive two mails  from Mike yesterday Saturday morning here in Cannes, I did not reply to the first, he wrote another one, the urgency being obvious enough, I must now absolutely fly to his rescue and assure Mike Farrell of my unconditional future support. Here is what he wrote:


"What crusade are the three misfits going to embark upon now that Mike no longer owns Spooks?
I credited you all for your efforts to increase the customer base, and thus the sales price of Spooks.
Your silence spoke more than you will ever know.

DUH???
A wipe-out of 20 pages of free publicity blog?
Mike already cashed in on that.
Three Don Quiotes (sp?) searching for a new windmill to tilt with.
I guess Daisy and Gordy are left, but they were minor players in yur campaign.
Daisy should thank you for the increase in contributions and support for her efforts from those you attracted to her.
DUH??
Why is it that you three guys have been banned from so many websites that you must resort to aliases and attempt to sneak in?
Why can't you stand up under your own names, names that you have rightfully become ashamed of?
(I guess I answered my own question.)

Frenchy, I would STRONGLY suggest that you take Mike B's promise seriously, as you appear to have done.

Mike at Spooks is gone. Find another target to enrich.

As usual, non-responsive replies will not be considered".

It's clear to me that Mike Farrell is very concerned about the future of my blog now that Mike Mountstephen sold the brothel (his (Mike's) statement says "transferred" not sold) to some one who lives in SG and comes to the Philippines 3 times a year leaving the floor manager (Please reviewers!.. don't mention again the word "mamasan".. Please!!) to run the place...

Mike F, may I,with your permission of course, lose my temper for a moment and tell my readers that you are a big Asshole for disclosing confidential information in your mail posted above?
My understanding was that the action you have trumpeted all over the cosmos suppose to be a secret between me, you, the few sexpats in your groups and... the rest of the world!..

Your disclosure about my blog offering free advertisement to crooked business,philanthropists,pimps low life expats and the like is overwhelming my tight schedule, flooded my mailbox with requests that I have no time to satisfy them all, I'm really pissed off at you being so indiscreet... I have told you in the past, the expat community in the PI is so colorful and rich in controversies that there will always be a subject to work on.
I am mad at you, because you have put me in "porte-a-faux" with Paul Petrea compromising my respect and friendship to a long time body. As you may recall, to his  (Paul) request I added to this blog his past trouble with the law, he was happy for awhile but now, he said, I should update his profile with more recent events, sending me all the necessary material for publishing hoping that his stagnant business will get better.. Request granted, here is the latest on Paul (The guy on the left)

Cebu, Philippines- This years annual drinking championship was won by an American, a Mr Paul Petrea.
Mr Petrea was a favorite to win early in the contest,it is reported that after only five minutes into the competition another bottle of Jack Daniels was summoned for.
Mr Petrea won by drinking a record number of drinks including Jack Daniels,beer and shots.He was presented with a gold medal and his acceptance speech was applauded when he said gwapo si Paul.
Pictured: Mr Petrea (left) showing his medal to another contestant. 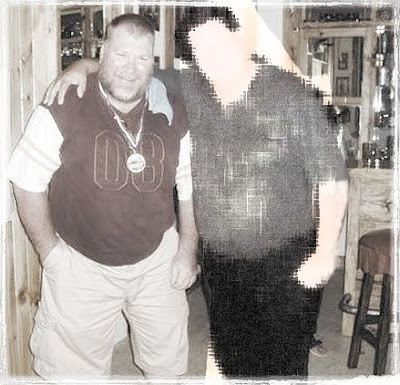 APRIL -8 -2010. To the request of the fellow (on the right) posing with Paul Petrea
I blurred the image out of respect for his privacy.


Expats in the Philippines, sympathizers and supporters around the world this is a historic moment. One of  our fellows has once again made the headlines in the Philippines winning the gold medal, yes fellows, GOLD MEDAL as the top drunkard in the country!!!... Please, all together, on a standing ovation and in one voice!... A la uno- a las dos a las tres...

Fellows, please, follow the example of Mike Mountstephen aka Spooks being the first to congratulate Paul in the warmest manner possible. 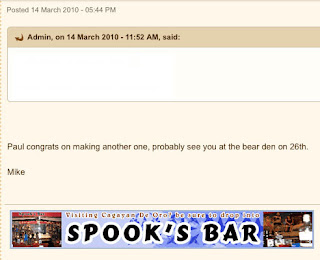 Daisy Cline you haven't done the same to your valuable friend. Why it takes you so long? You are a moderator to his forum, you know where to go for this, don't you? Bob Ward has already done so!... Excuse me? Bob's gone? Nah.. that's all gossips lol!! It's now your turn!!..
And for anyone else, the link to congratulate our hero is here. Please click and write your comment.

So, Mike F how you score that? Did I do well? How about that Paul?  Happy now?

P.S. Mike F. Would you please the next time you write me to include the state of your K-bar? Is still rusted or you have sliced the throat of few chicken and is now operational again? Also, I am looking for some material for a "free advertisement" on Mike Belter. Do you have any?
As for Spooks, the "transfer of operations" the sexpats, the "social clubs" and others, I haven't been silent!... I am writing when I want to, when my informants and supporters send their report, my life first, because, contrary to your statements I do have one, a beautiful, as anyone living in one of the top tourist destination in the world, We are not in a hurry Mike... Be patient, I'll keep you busy. Promised.

I am so glad to read in today’s Gold-Star Daily that women's organizations in CDO have put to shame Daisy Cline and her “chicks”. Hummm You like the “chicks” ah!